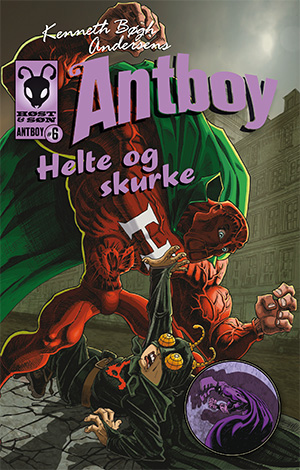 I hadn’t been in the church tower for more than ten minutes when they suddenly began to ring—not the church bells, the alarm bells.

It was happening nearby, just a few streets away, and from my observation post I could see it all. A tragedy in the making.

On one of the fourth-floor balconies, the door of the apartment stood open, and the home’s youngest inhabitant had crawled outside to get a little fresh air. A baby—a boy—no more than a year old. Which should have been okay, since he was too small to climb the railing. But there were three crates stacked on the balcony so foolishly that they formed a kind of stairwell leading directly up the edga. And the little guy was now crawling toward it.

I leapt down from the church tower, clambered up the wall of the nearest building, and bolted across the rooftop.

I may have been fast, but so was the boy. Just as I caught sight of the balcony again, I heard a succession of terrified squeals below me. People on the street had discovered what was happening and they gaped in horror at the little boy. He was standing on the top crate now, leaning over the edge of the balcony to reach the flowers in the flowerbed.

If he lost his balance now… If he stumbled …

I’ll make it, I thought and picked up the pace. I have to …

I noticed movement out of the corner of my eye. Something was heading my way. It came out of nowhere, it came fast, and I didn’t even have time to gasp before it slammed into me, causing my vision to go black.

The entire world flipped somersaults as I rolled down the rooftop, and suddenly I was in free fall, whizzing toward the backyard and landing with a thump against the garbage can, which crumpled like tinfoil.

I blinked the haze from my eyes and got to my feet again. With a hammering heart, I jumped onto the side of the building, clambered up to the roof again, and stared at the balcony.

The baby was still there, but he was no longer in danger. He was in his mother’s tight embrace now, her entire body trembling, shocked, and she was mumbling to herself over and over. But she was smiling, too, a smile that expressed great relief. Even above the cheers of the audience down on the street, I could hear what she was muttering as she held her little boy close and kissed his forehead: “Thank you, Heros, thank you, thank you.”

He was gone now, had vanished as quickly as he’d appeared. But he’d been here, he’d saved the baby in the final moment, and down on the street Heros was once again being praised. But they hadn’t witnessed what had happened, of course, in the moment before the final moment.

I’d been assaulted. By Heros. Why?

Down on the street, people were still cheering.

Up on the roof, I was still trembling.